What happens when your normal, routine life suddenly gets ruptured, torn to shreds? How do you pick up the pieces, how do you find the strength to go on? Mama Deba’s story, like the story of millions of Congolese women in these past two decades and more, is a story that holds war, death, rape, determination, and survival. We are proud that ODWEP was able to offer life-saving support to this remarkable woman.

She lived with her husband, Baba Deba, in the village of Kasenga. Baba Deba was the manager for a private fishery business in the nearby village of Makobola, in Bubembe district, earning enough money to take good care of the family. The routines of their lives were pleasant and their roles were set: every morning Baba Deba woke up and left for work, and Mama Deba was kept busy raising their six children and looking after all the household needs. In the evenings, Baba Deba returned home and the parents and children spent loving time together. 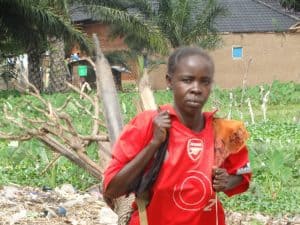 Then one day, the horrific unimaginable happened. On May 15, 2016, Rwandan soldiers came to Makobola and massacred the whole village, including Baba Deba. They then came to Kasenga, where they raped and killed.
Mama Deba was raped by four soldiers – and later found out that she was both pregnant from the rape, and HIV+. Her husband’s family rejected her, refusing her comfort and refusing to allow her to inherit any of Baba Deba’s possessions. She had no marketable skills, no way to support herself and her children – seven, now (one girl and six boys), after the new baby was born.
It was at this time that she met an ODWEP team member. Working in partnership with NASECO Seeds, we obtained funding to buy seeds and agricultural implements and we began our Agricultural Training program in her area. Soon she was growing yams and beans, both to feed her family and to sell for income. She enrolled in our Literacy and Numeracy program (the Catholic Church donated some of the materials), learning to read and write, to speak some French words commonly used in the marketplace, and simple arithmetic that could help in her day-to-day life.
Her struggle is ongoing, as she copes with the trauma of her experience, her HIV status, and the needs of her children. Her courage inspires us all. When we asked for her permission to tell her story, she wanted to know the purpose. We said that we wanted to tell the story of someone ODWEP recently helped, so that new friends of the organization might support ODWEP, and we could then help others. When she heard this, she said, “Yes, of course, you can tell it all.”